We compile a new China economic policy uncertainty (henceforth China EPU) index using information from mainland Chinese newspapers. The methodology follows Bloom, Baker and Davis (2016). Data is updated on this website on the first day of each month.

For each newspaper, we search for articles which contain at least one keyword in each of the three criteria, namely (1) Economy, (2) Uncertainty, and (3) Policy. Table 1 shows the keywords used for China EPU. We scale the number of articles in each month by the number of articles that meet criteria (1) for the same month. The series is then standardized to have a standard deviation of unity during the period from January 2000 to December 2011. We compute the simple average of the monthly series across ten newspapers. Lastly, the index is normalized to have an average value of 100 in the period from January 2000 to December 2011.

Our China EPU index has several advantages over a similar China EPU index constructed by Baker, Bloom and Davis. First, our index averages out idiosyncrasies in individual newspapers and gets a better measure of uncertainty. Indeed, we show that our index performs favorably in VAR exercises relative to the SCMP index. Second, we construct a daily index and several policy-specific EPU indices for use by financial professionals and the general public. Last, although one may worry that mainland ​Chinese newspapers are subject to media control, we take advantage of the large number of newspapers available to conduct several checks to make sure that the EPU index is not qualitatively affected by media bias.

Download Data
The daily China EPU index is updated on this website at 12:00 PM HKT (4:00AM GMT) each day.
The daily index is based on 114 general-interest newspapers in mainland China provided by Wisers Information Portal. For details, please refer to our paper Huang, Y., and Luk, P. (2019). “Measuring Economic Policy Uncertainty in China.” China Economic Review. ​

To compile these indices, we specify additional criteria for those articles that satisfy keyword terms in Table A1 in the paper. For details, please refer to Huang, Y., and Luk, P. (2019). “Measuring Economic Policy Uncertainty in China.” China Economic Review.​ 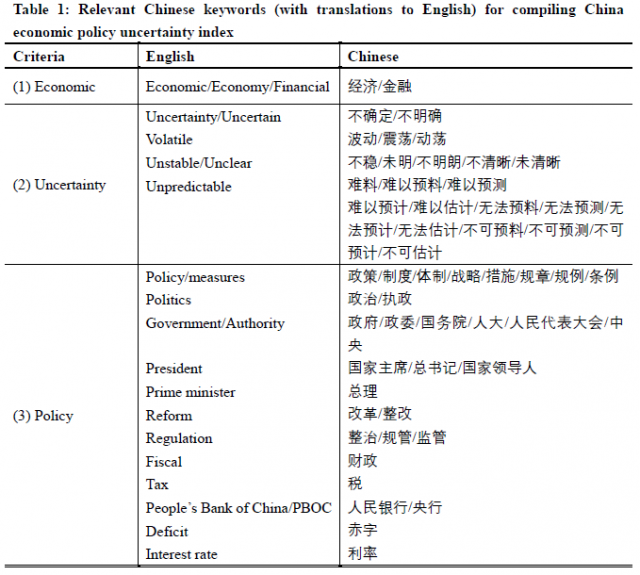